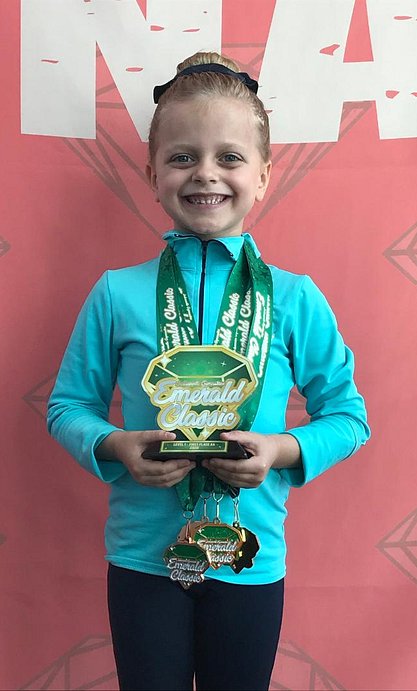 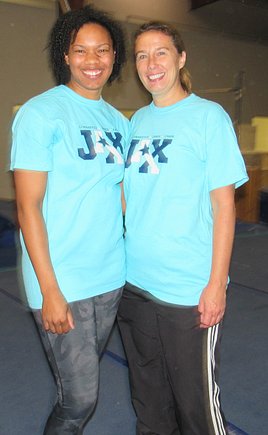 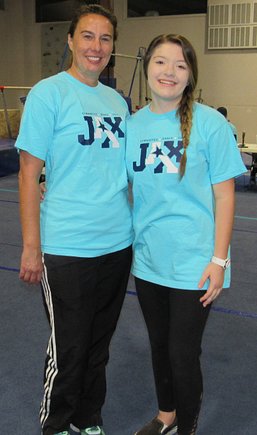 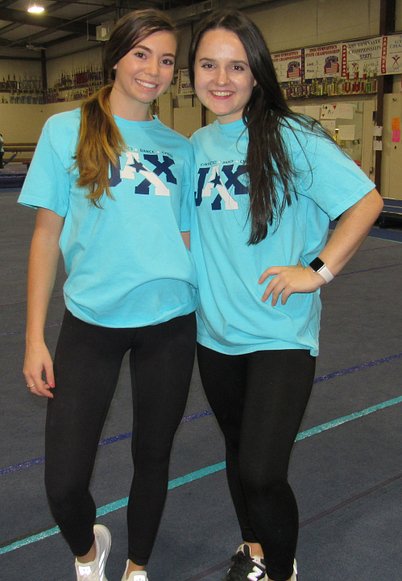 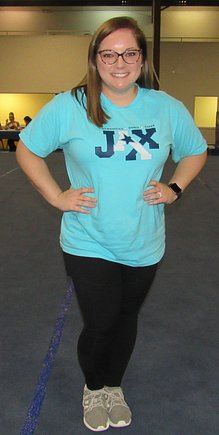 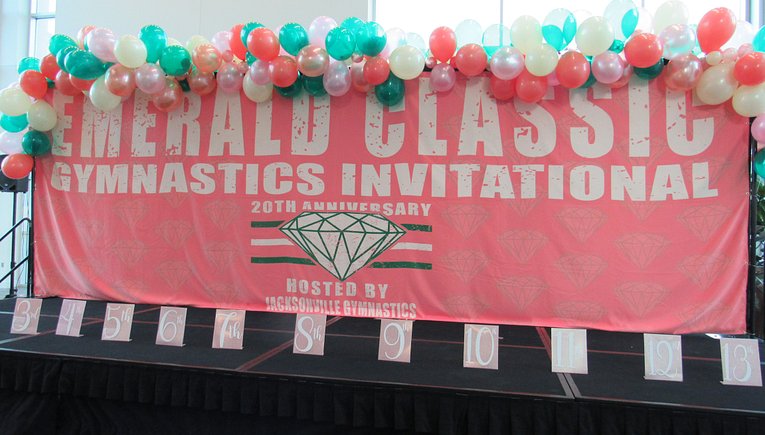 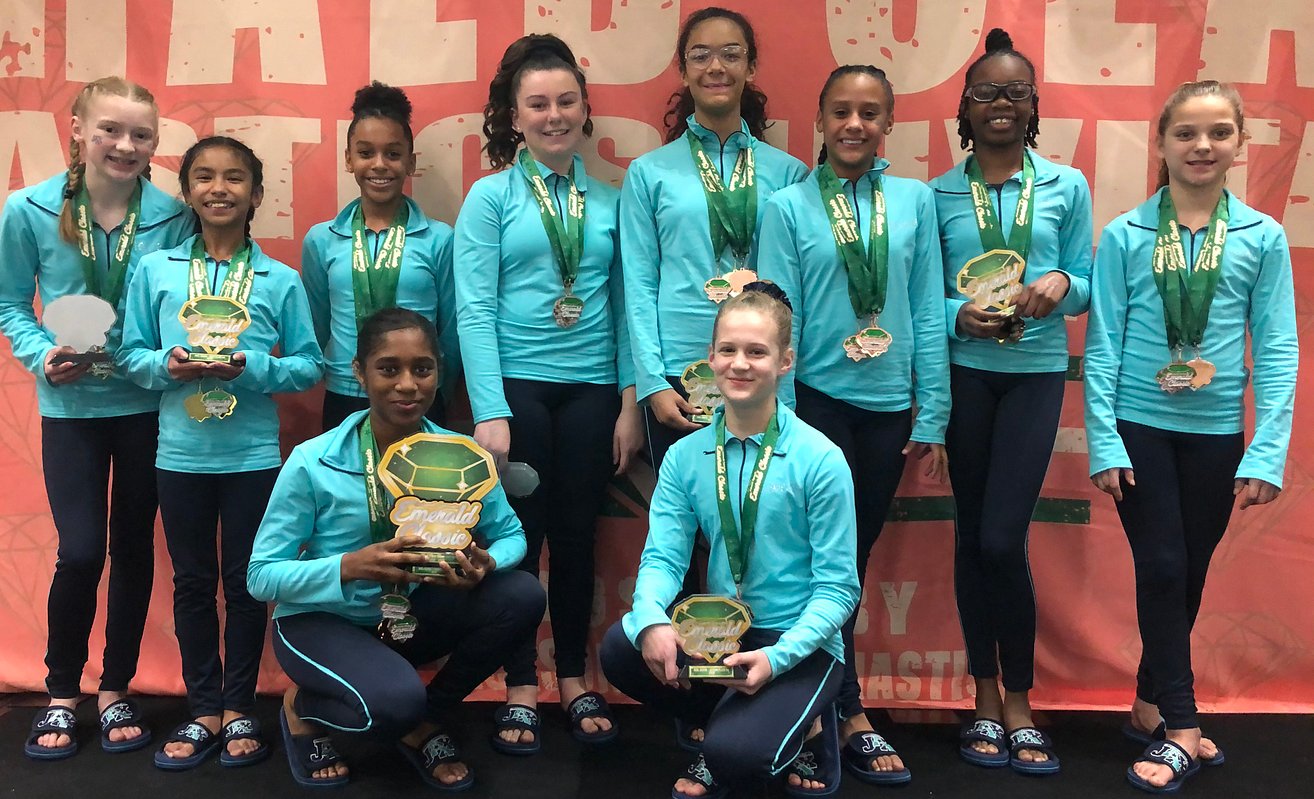 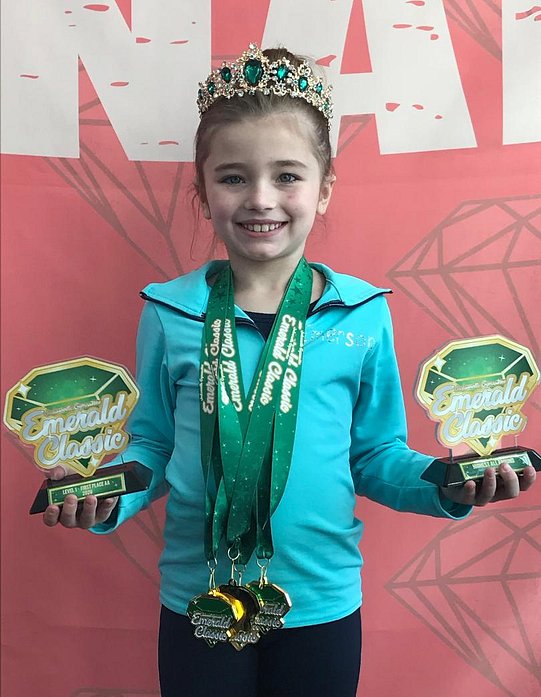 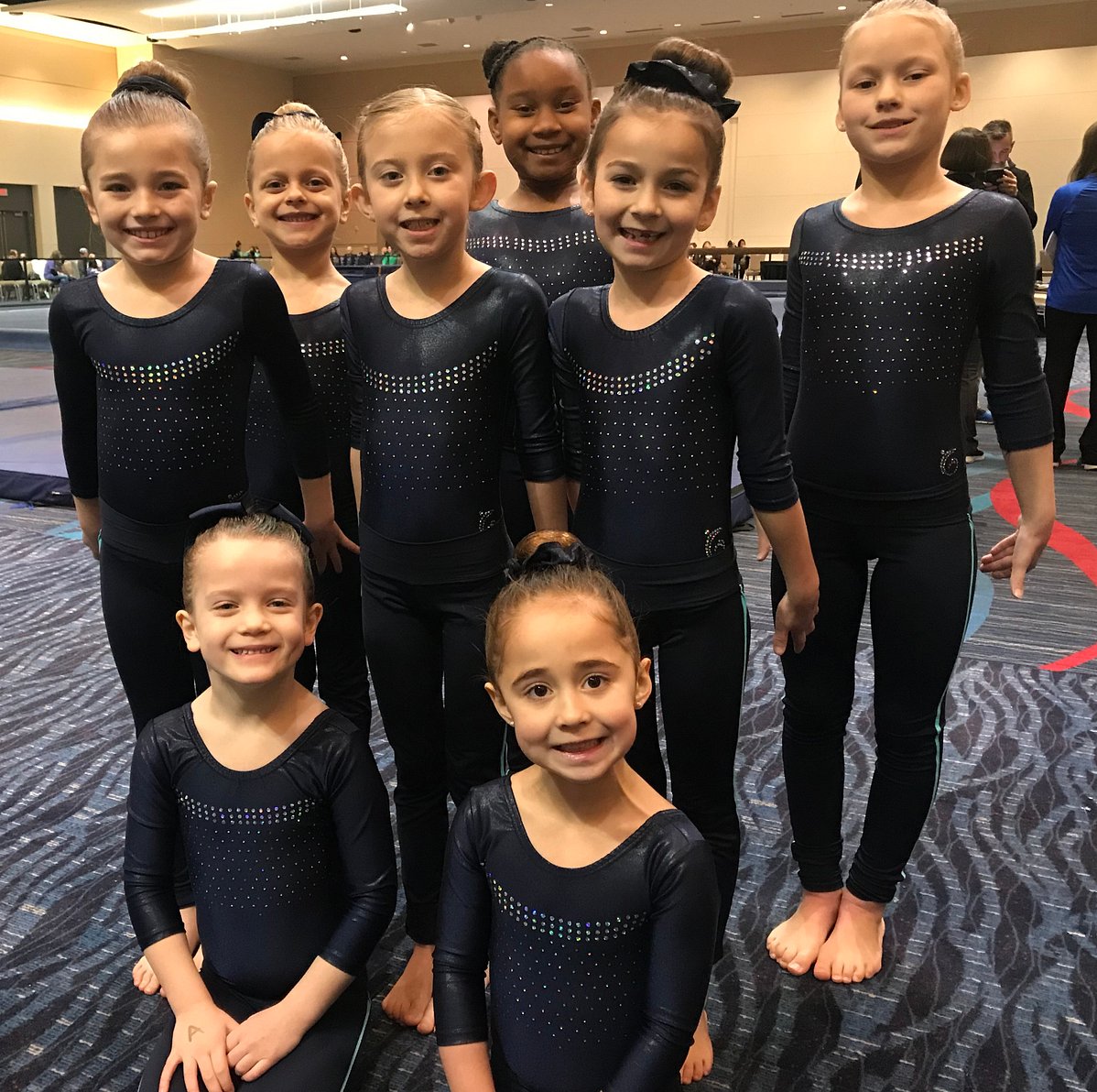 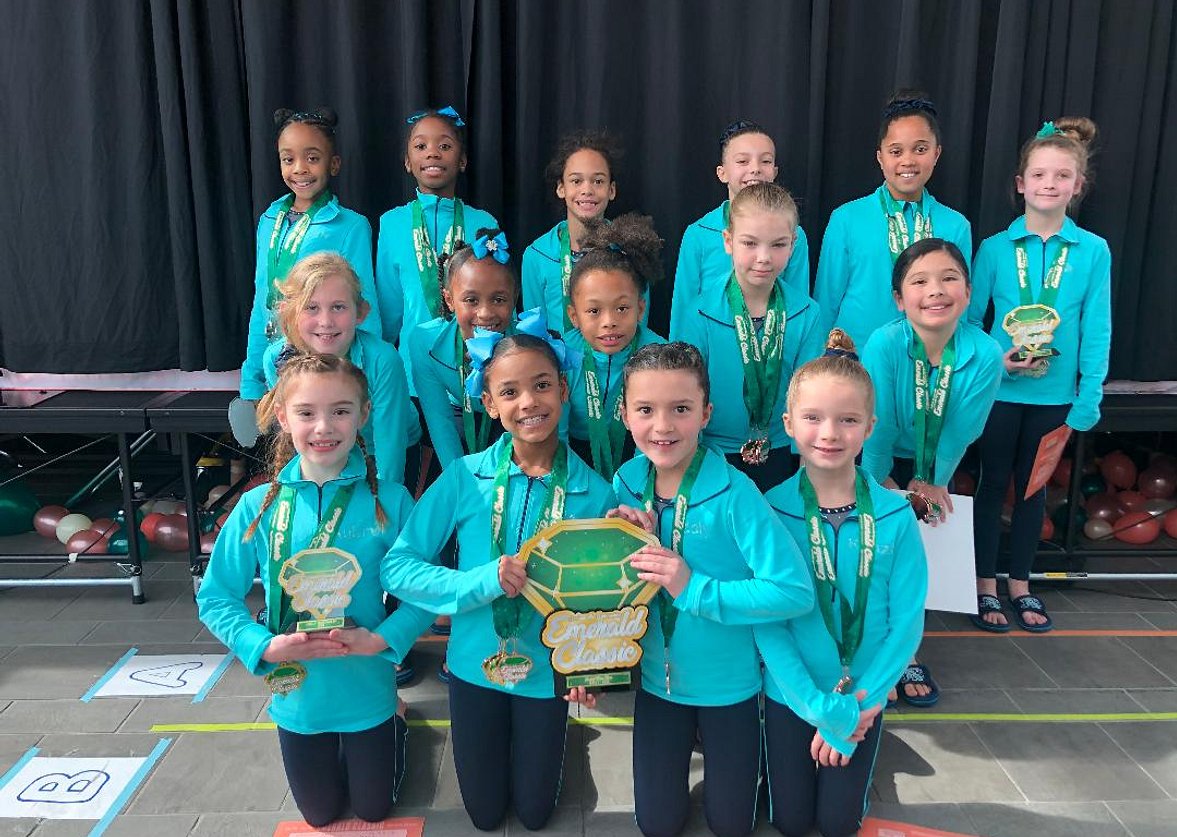 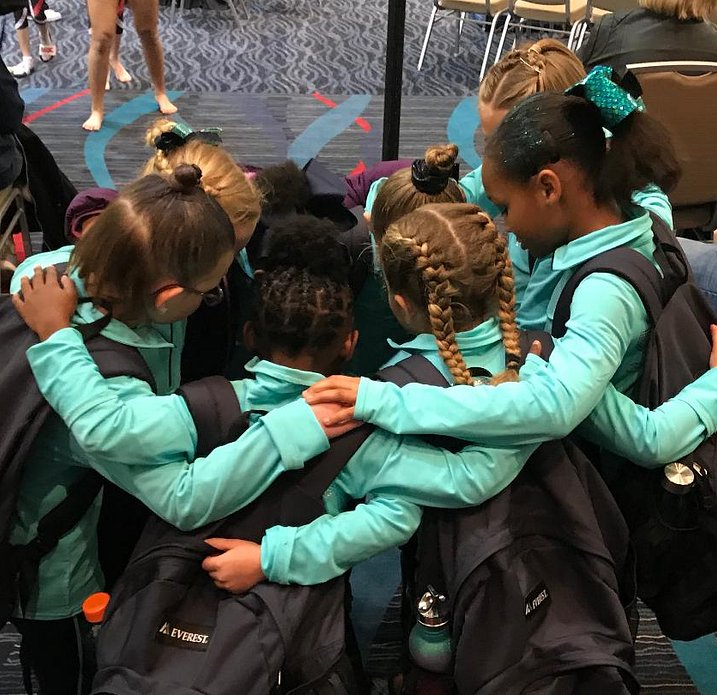 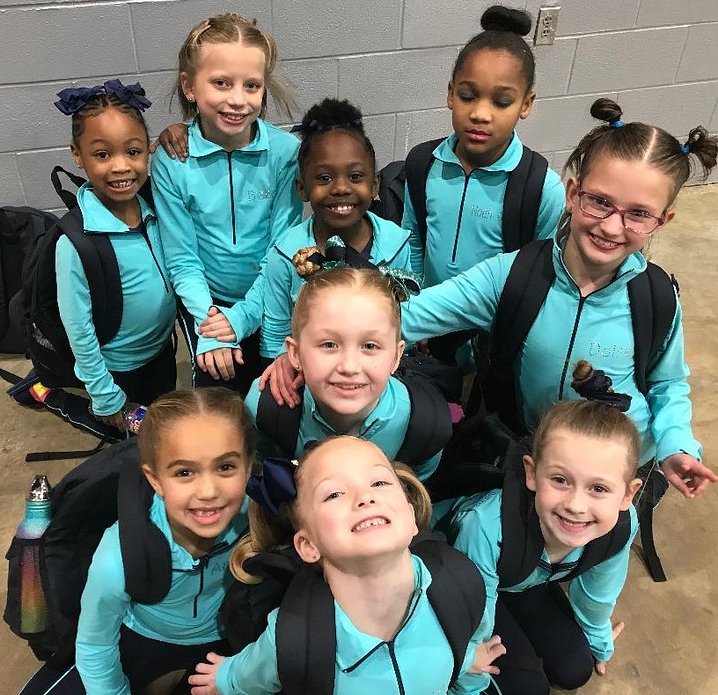 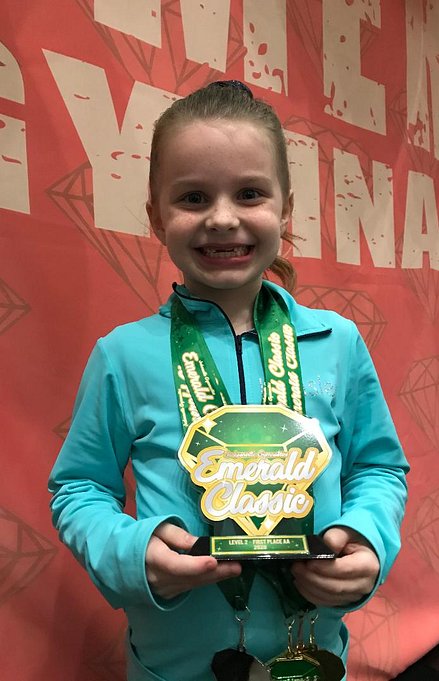 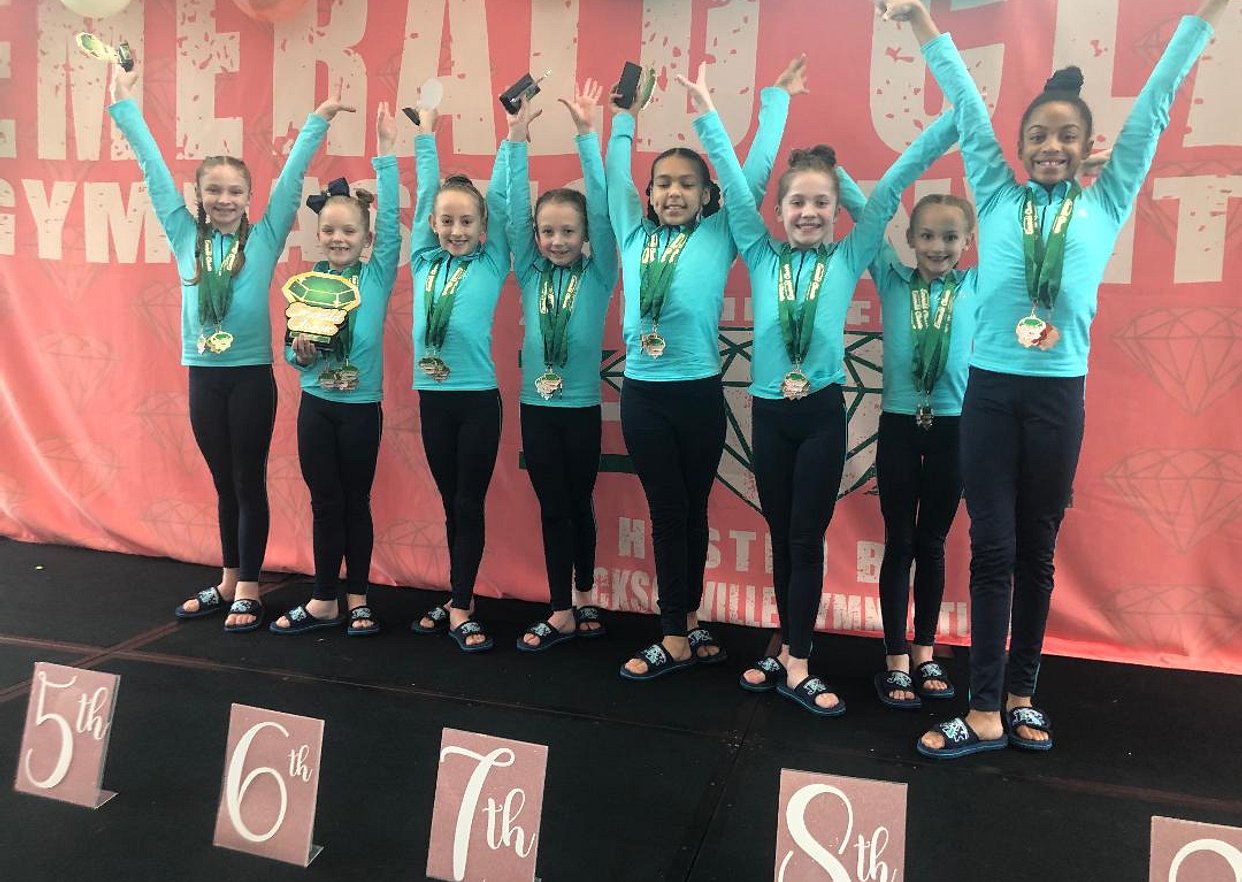 Summer Hoelzman won the First-Place Individual All-Around for her age bracket.  This is just Summer's second competition with Jax Gym but I apologize because things were so hectic and Ms. Lois was coaching the next session and couldn't go to awards to get a photo of Summer but we congratulate you, Summer, and we are so happy that you are a part of our team.

Kensley not only won the First-Place Trophy for winning First-Place Individual All-Around for her age bracket, but she had also earned the  second high score in her session. Kensley is in her second year competing for Jax Gym, having been a member with her teammates of the first Level One Team at Jax Gym.

Top Honors (First - Fifth) for the Jax Gym Level Two Gymnasts follow:  (By age and then alphabetically by first name)

The third session of Friday evening began at 6:05 and featured 91 Level Two gymnasts from ten teams.  Competing for Jax Gym were Kensley Haden, Jillian Hollis, Daisey McCuin, Paisley McDaniel, Isabella Ortega, Lianna Overholser, Avah Williams, Noah Grace Williams and Aniya Young.  Larsey Watkins was unable to compete due to injury suffered at home but she was with her team, helping to cheer them on.  The team was pleased that Larsey could be with them - most of these gymnasts have been together as a team for the second year.  The Level Two Team gymnasts are coached by Coaches Lynn and Kaylen.

Emerson won the First-Place Individual All-Around for her age bracket but she also had the highest all score for this entire session.  She was awarded the crown for this wonderful honor.

These two photos were taken at earlier competitions.

Jax Gym hosted its largest competition yet in its 20 years of hosting gymnastics competitions in a very successful three-day competition.  The meet was held again at the Little Rock Convention Center.  Over 800 gymnasts from 26 teams from Tennessee, Mississippi, Louisiana, Texas, Oklahoma and Arkansas competed in this eleven-session meet.  The scores for the meet are on Meetscoresonline if you want to see scores.

Coach Laurel, along with our hard-working staff members, with the help of Michael York on computer, did a fantastic job and we can't say just how proud we are of all of them - I will get into more of appreciation later.

The first session began at 2:00 on Friday afternoon and that meant that that our staff and the volunteers who came to set up had to really hustle to be ready at this earlier time.  First session featured 48 Xcel Bronze gymnasts from six teams.  Jax Gym does not compete xcel bronze, so we had no one in this session.