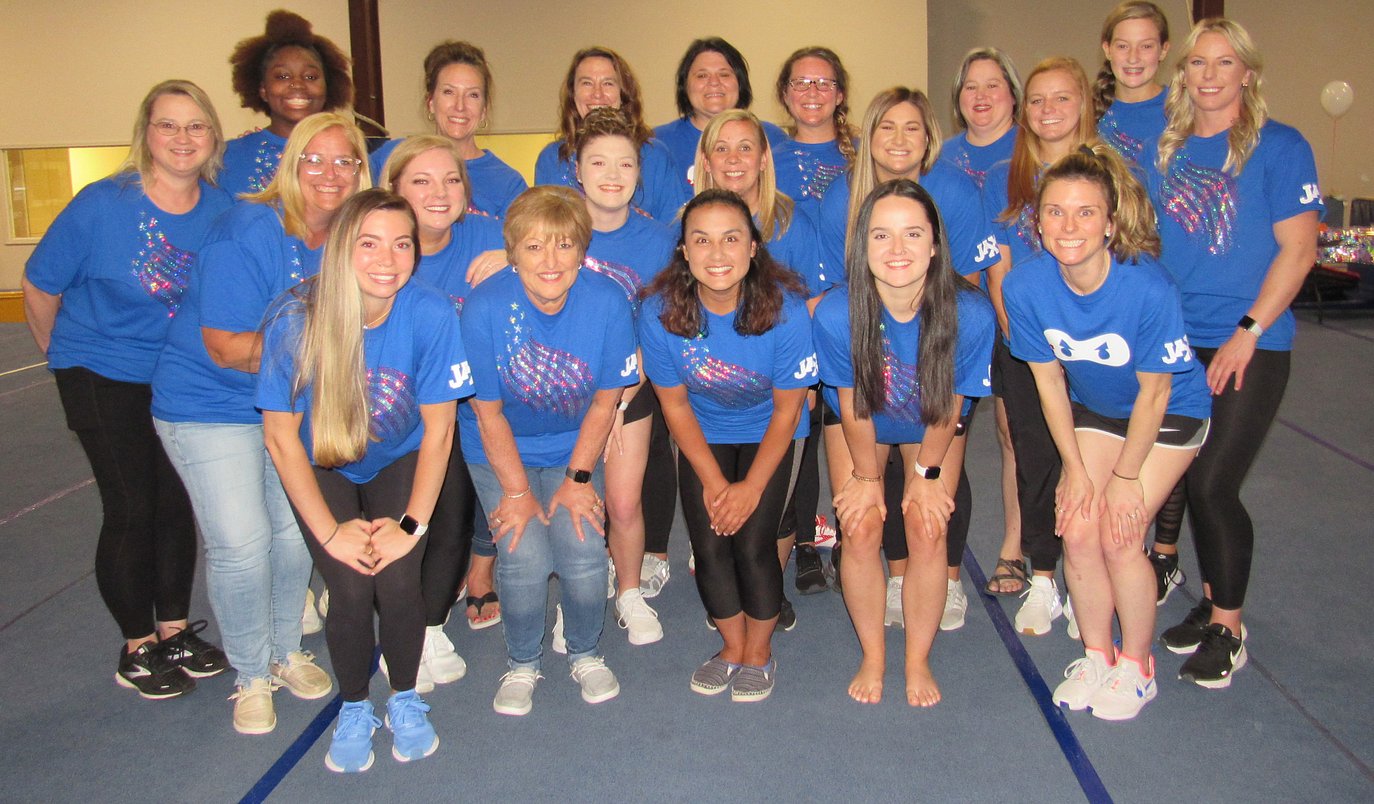 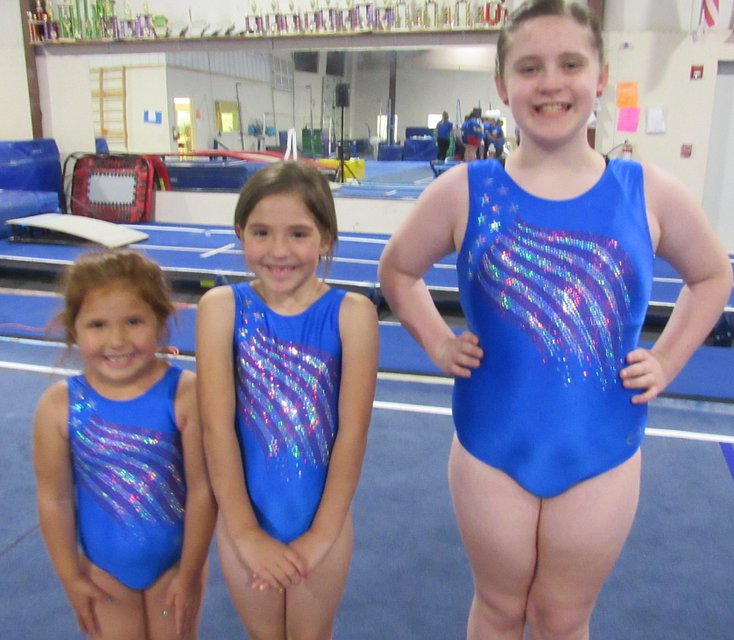 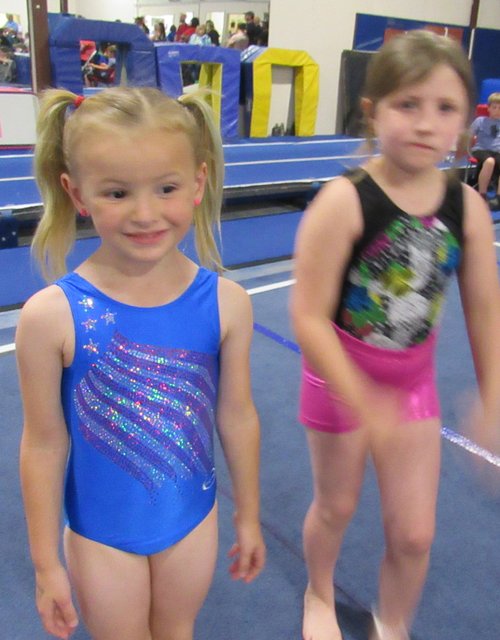 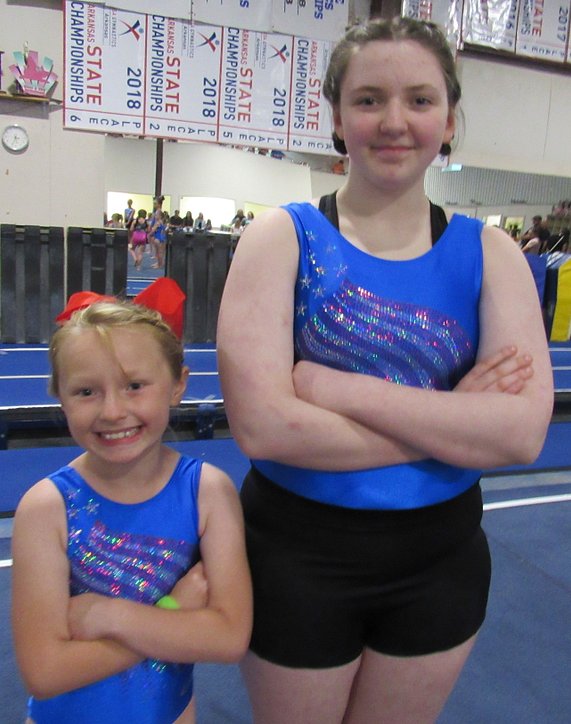 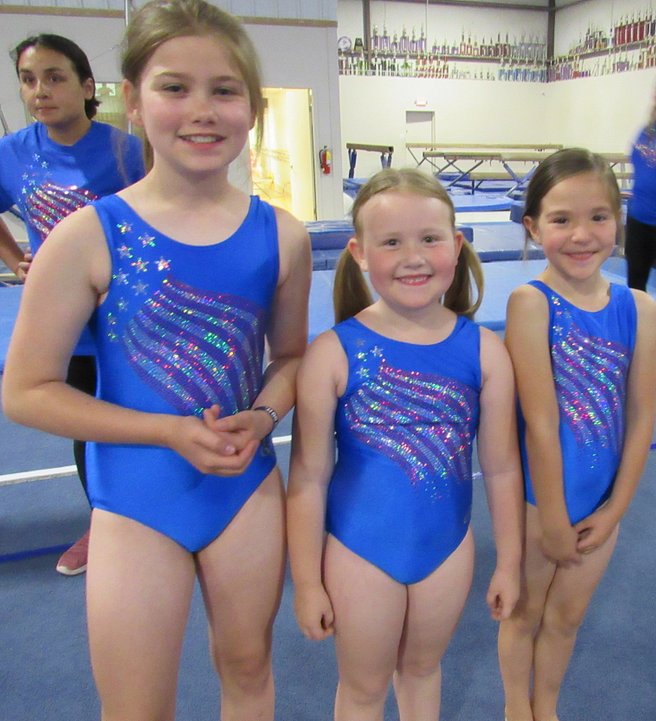 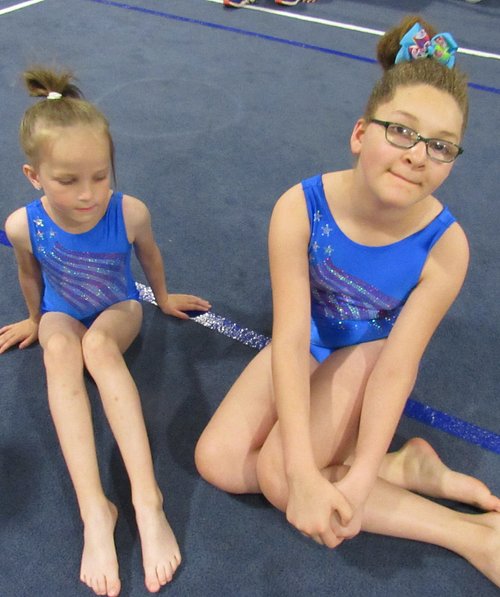 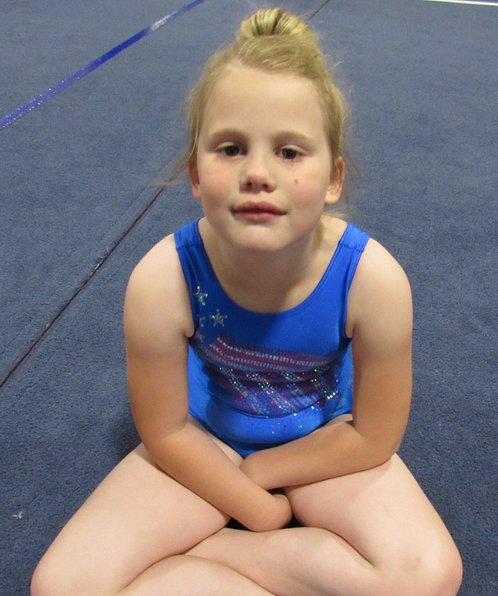 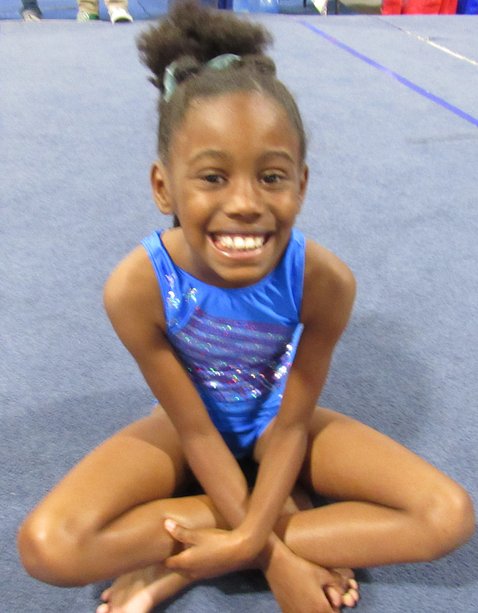 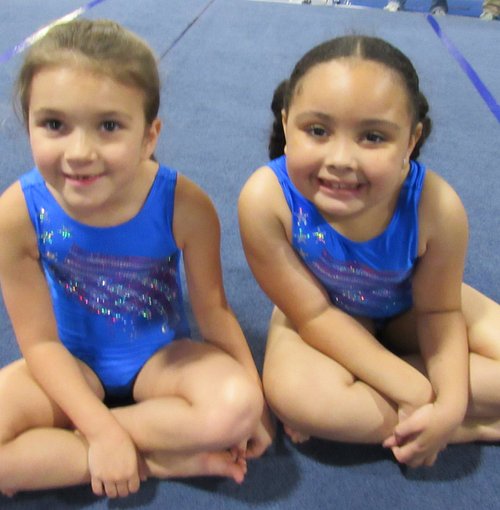 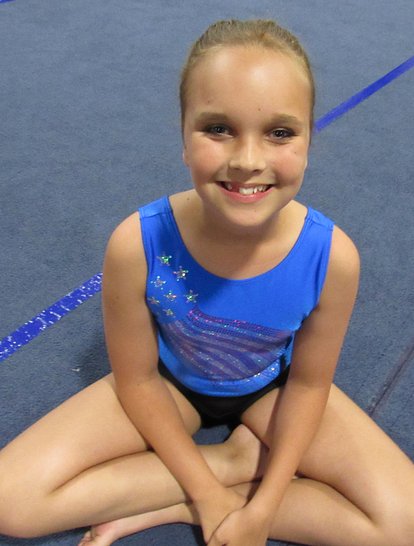 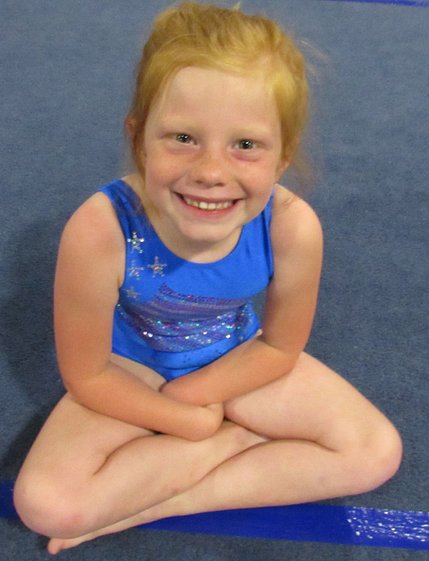 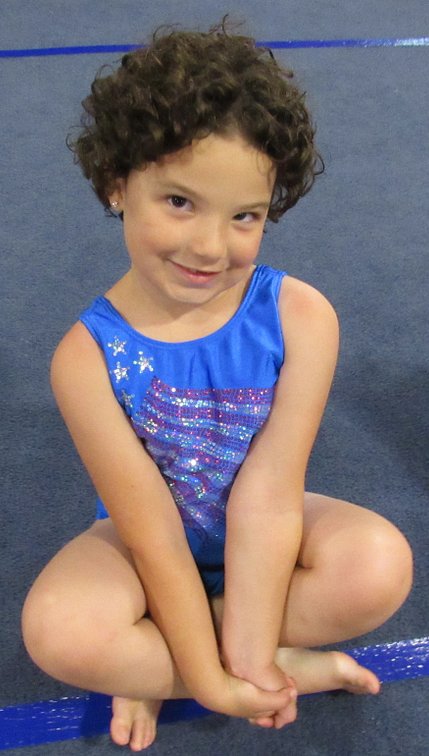 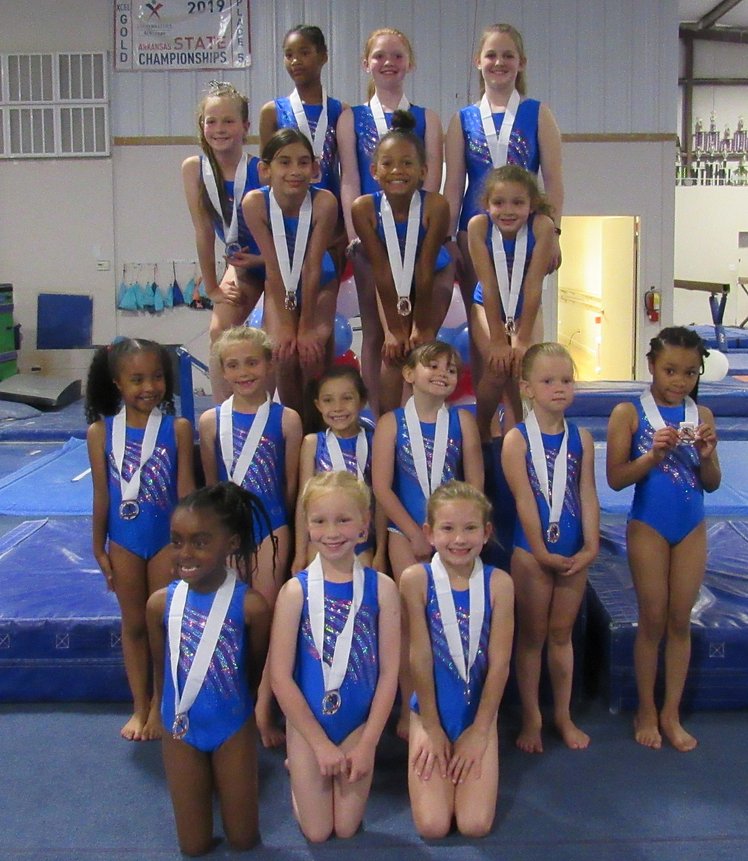 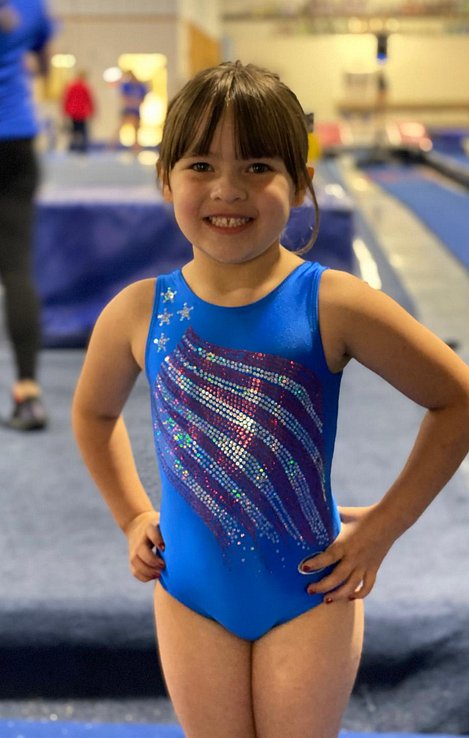 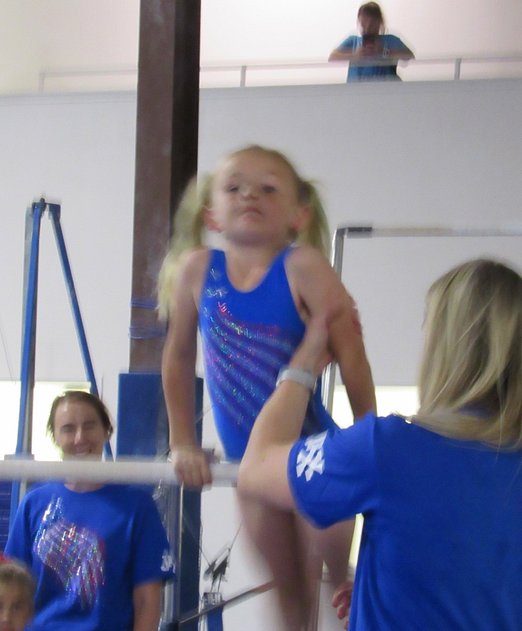 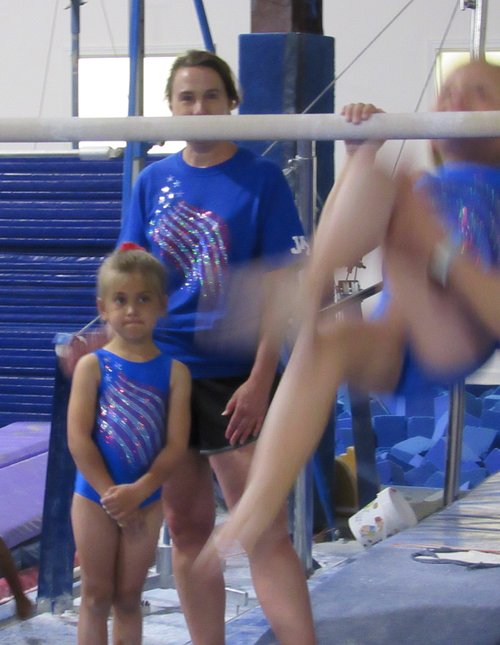 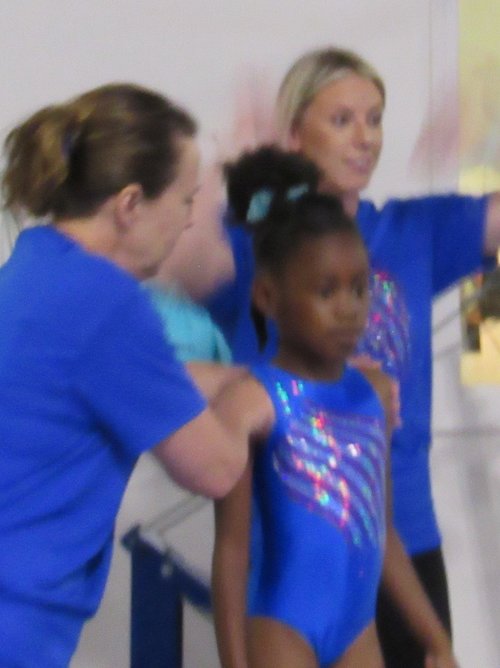 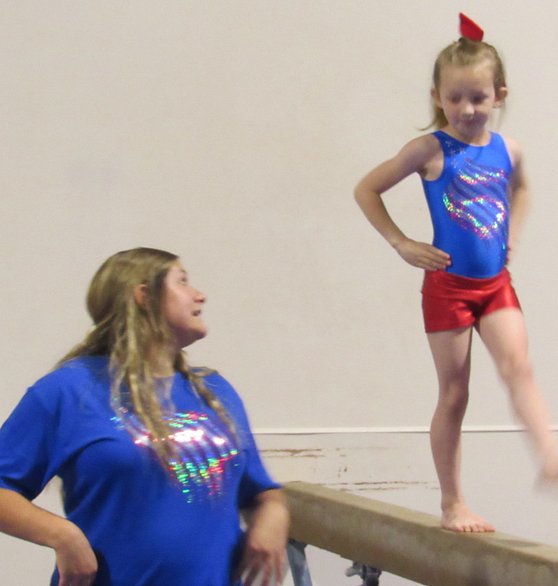 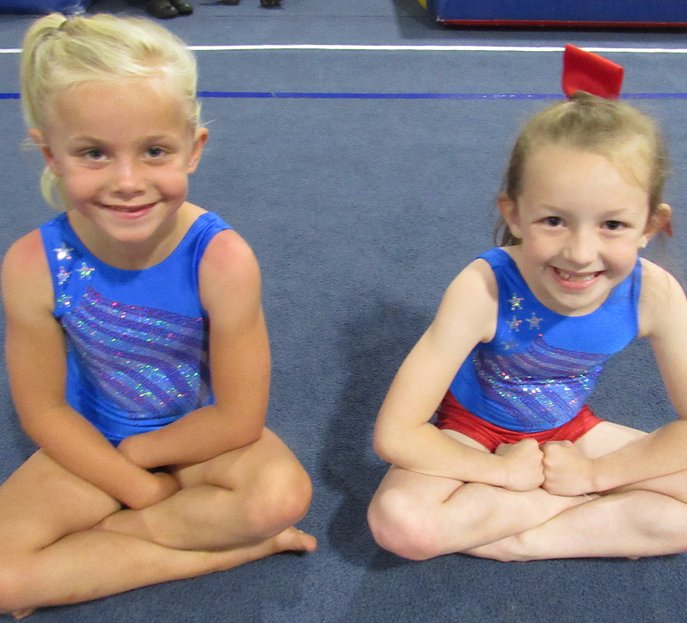 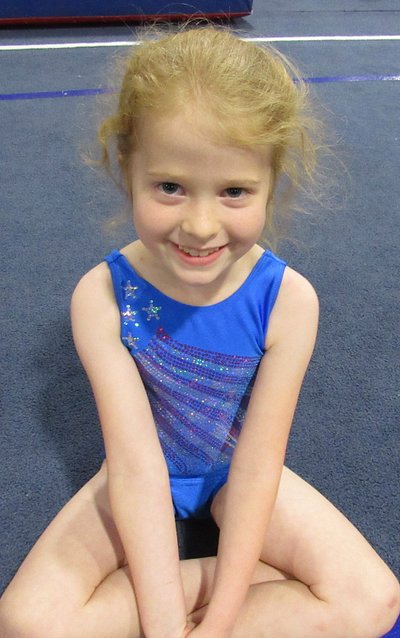 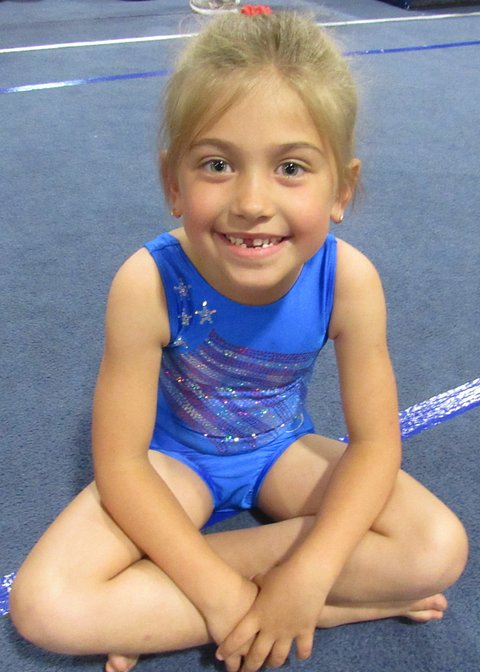 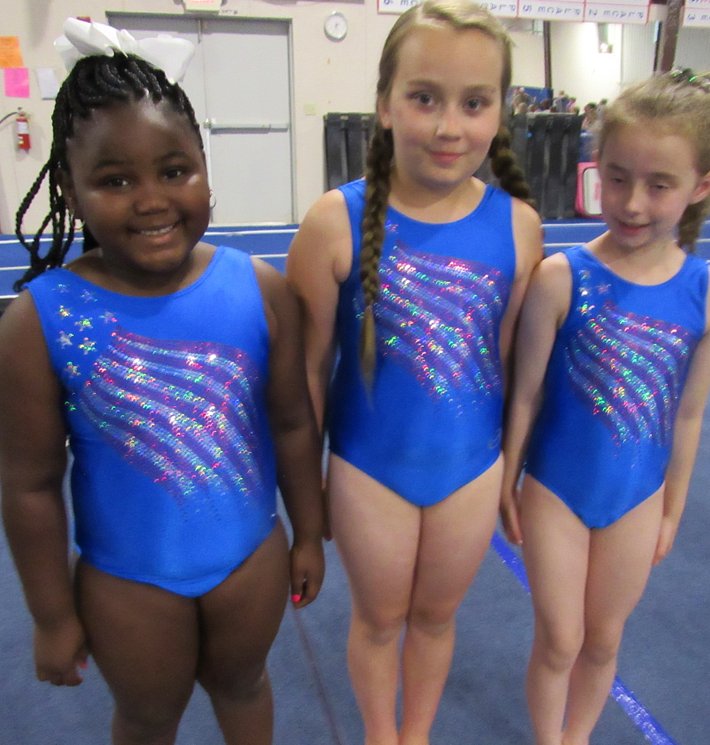 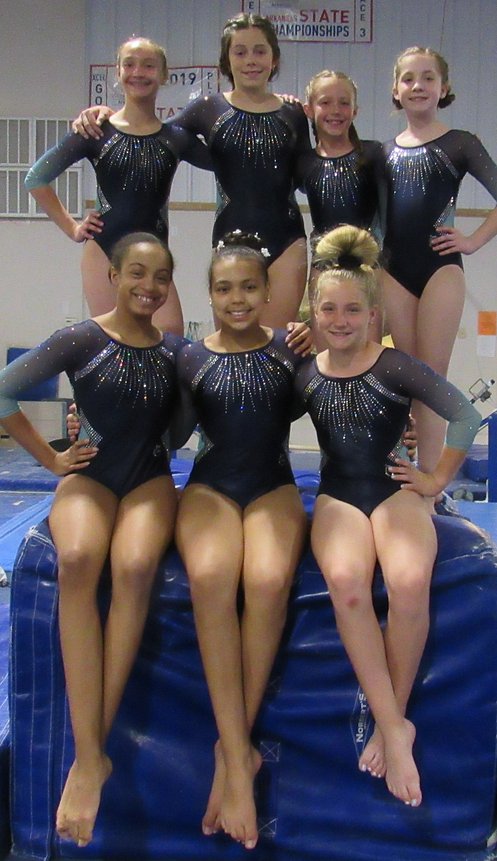 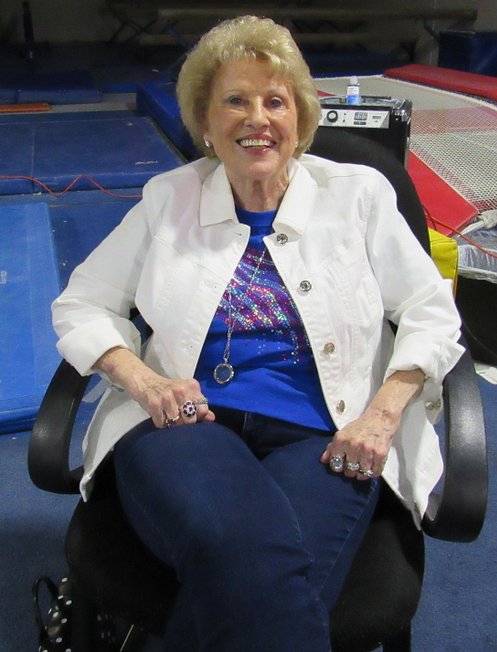 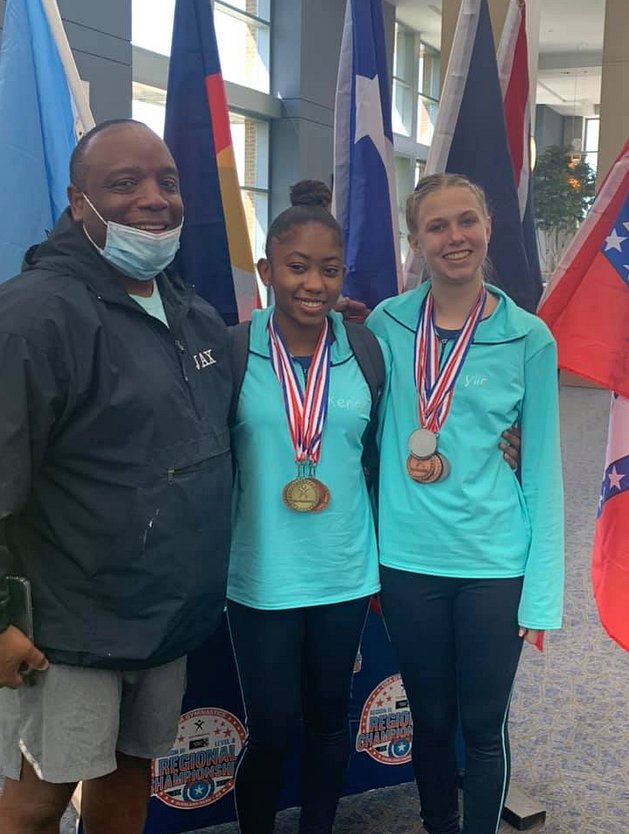 Natalie and Emerson, top row are working toward Level Eight - Emerson qualified at State to attend the seven-state Regionals in Aurora, Colorado this past month.  Juliet, Parker, Tiffani, Charlie and Brooklyn have been Level Six and will be working this summer toward Level Seven.  Kylie and Kendyl got away before we got the group photo - they had both qualified at State to attend the seven-state  Level Eight Regionals in Overland Park, Kansas, earlier this month, where Kylie placed second overall All-Around and Kendyl placed Fourth AA.  We are so proud of all of these girls, but especially Kendyl and Kylie - Kendyl placed First on Floor - they both did so well and really represented Jax Gymnastics!!! They will be working toward Level Nine this summer.  (And I've been eating Brooklyn's grandmother's great chocolate chip cookies at meets since she was very young!)  It is so much fun watching these girls progress up through the levels and to see their pride in themselves - and to know how hard they work to get there.  Just realized that Lily, another Level Six gymnast was not in this photo.  She also will be working toward Level Seven this summer.

I will have to ask our staff members how long they have been with us - about as long as I can remember - that's Jackie York, Shelly Soderlund, Jackie Cross and Kristina Armstrong (and Johnette).  Professional staff pictures were taken Thursday night and their pictures and resumes will be brought up to date this summer.

As you can imagine, it has been a struggle to keep a successful business and programs going during these past months of Covid.  We are very grateful for the financial assistance we have received, but we are most grateful for the support that you, the parents, have shown for us.  I know that your kids love you extra for it.

These are coaches of Jax Gymnastics and staff members of Huff 'n Puff.  This was taken on Thursday night and Rachel had another commitment and had to leave before we could take this picture.  Coach Dennis was working and could not be here.  As I was looking at this picture, I counted nine of these young coaches who grew up with us and competed with Jax Gym.  Then  I looked at the six coaches who have children who have competed or are currently competing Jax Gym or Jacksonville Dance Company or both.  And four of the staff members have had or have children who have competed in either JDC or Jax Gym with us.  When I say we are a family business, I just realized that it is even more so than I realized.  If you count just my family alone, it starts with me, in 1981; then Laurel who has made this the successful busines that it is, and Tori competed with us and coaches  team (and her son Wryatt, age four, who is in gymnastics and Ninja is fourth generation) and Madi, who just graduated from UofA, Fayetteville, was in gymnastics her entire life from age three to seventeen and ended her gymnastics career as a Level Nine gymnast. And I could go on and on about this great staff - Jenna, front row left and Sara second from right started out as young gymnasts with us and are fantastic coaches.  Coach Kelsey on the right front competed a long time ago with us - I can remember going to regional competition in Texas  where she was competiting I think Level Eight.  She was one of our first regional competitiors.  And then there is Coach Lois who competed on Coach Laurel's first competitive team of eleven Level Four gymnasts and was also on Laurel's first competitive dance team - and has been with us since for 25 years.  And I was just thinking back, Laurel grew up in this business and started gymnastics when she was three, and took dance with HnP when I was first teaching aerobic dance back at Gregory Place Shopping Center in 1981. (And she taught gymnastics for several years in the late 80's or early 90's. after I built the first HnP building in 1984.  )   Boy, I have to say, we have come a long ways since then.  Thank you to this great staff and to our parents for supporting us as you have over these years. And most of all, I tribute our success to my wonderful daughter, Laurel, for all she has done for Huff 'n Puff for the past 25-26 years, if we don't count the younger years.  (She was a tap demon and taught her first class of adult tap at age 11-12.)

Huff 'n Puff held its annual Skills Revue at the gym on Tuesday and Thursday nights and it was so much fun to see these kids show off their skills for their parents and grandparents - I think a good time was had by all.   Not all of the photos turned out - the kids were faster than we were but Laurel and I have decided that it is time for a faster camera to try to keep up with our fantastic kids!  We want to thank you parents for your participation and we also want to thank our great staff at Huff 'n Puff - we could never do what we do without your support and the support of this wonderful and dedicated staff.

The first Revue was held at 5:30 on Tuesday and was for recreational Ruby gymnasts.  In class, the gymnasts work on the four activities of gymnastics - vault, bars, beam and floor work.  The following pictures will show some of their activities.  And I apologize if I don't have your gymnast in the right program.