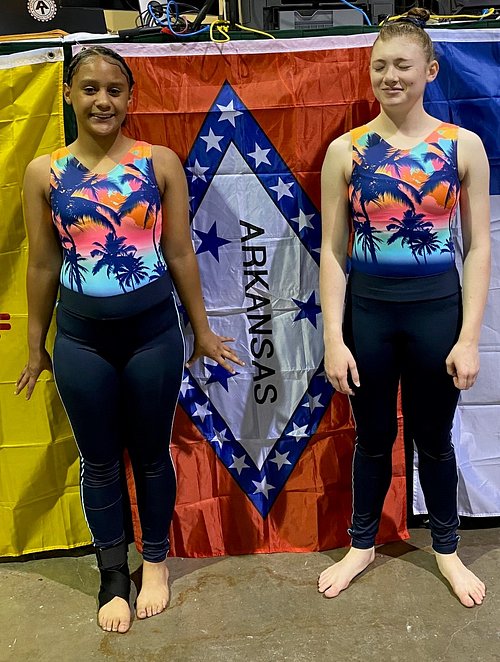 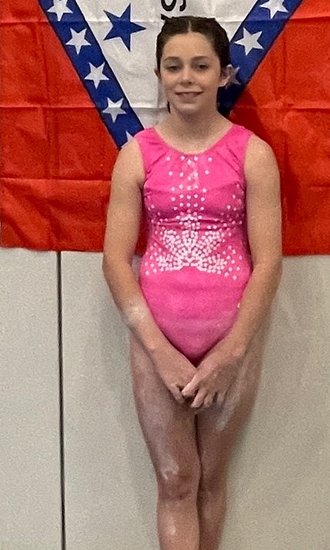 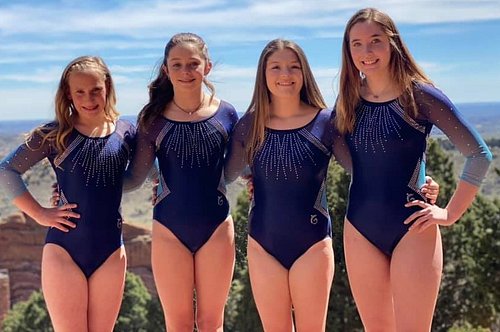 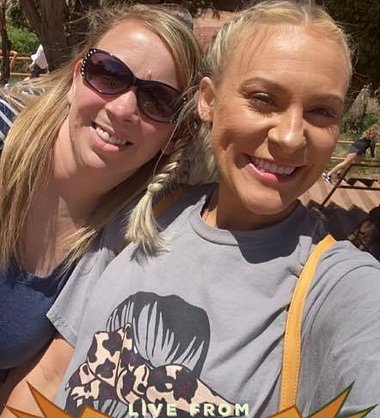 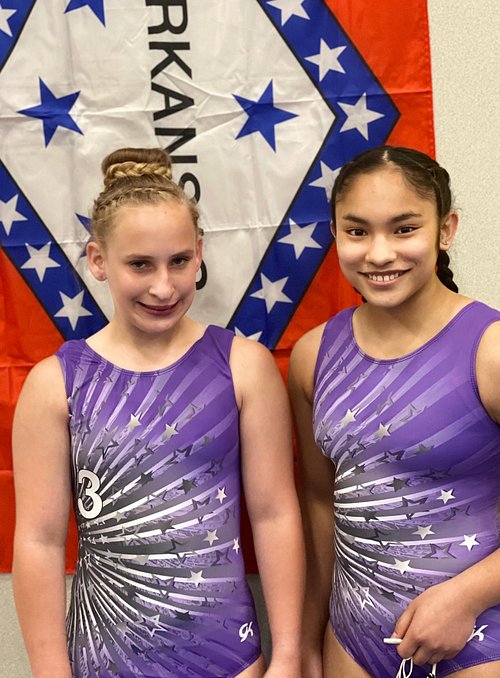 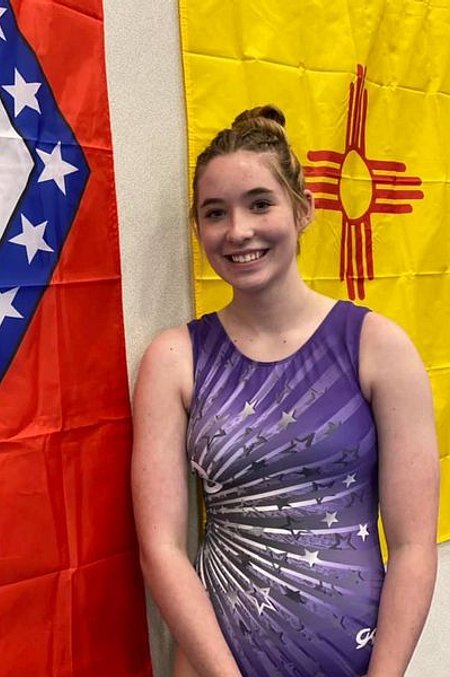 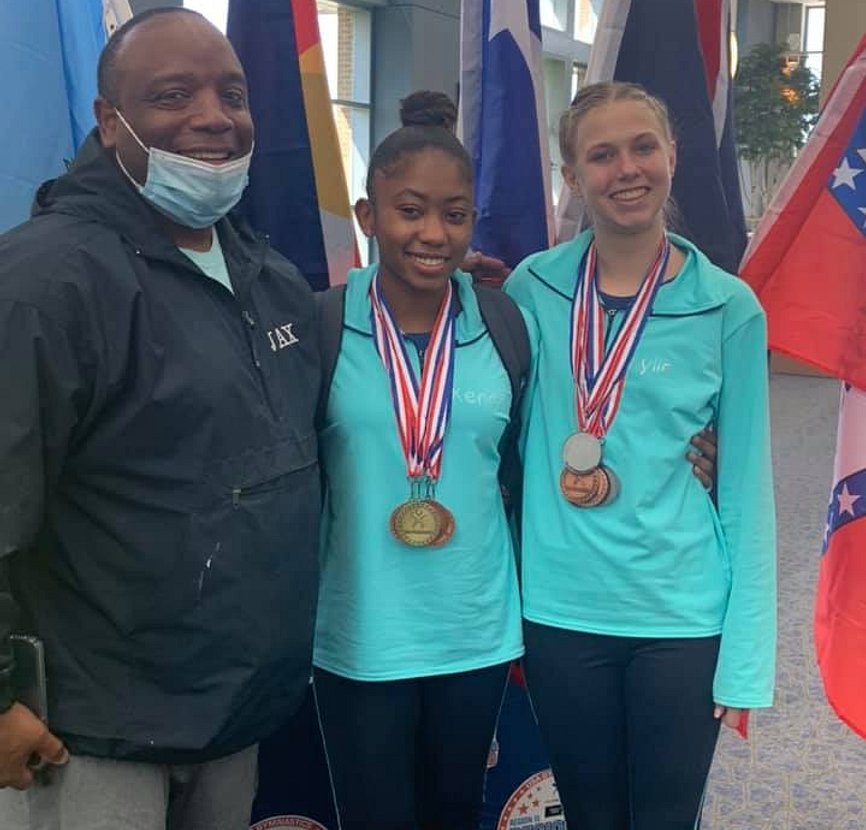 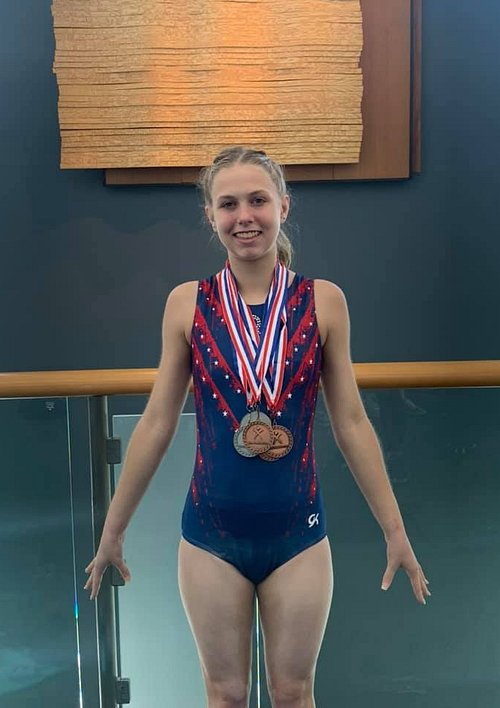 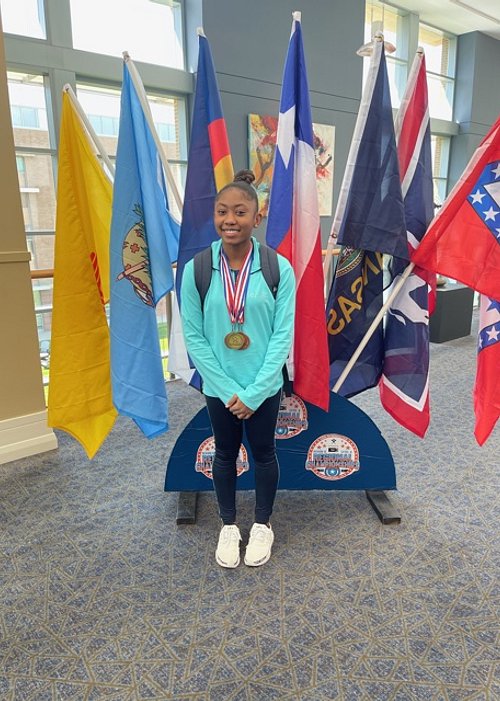 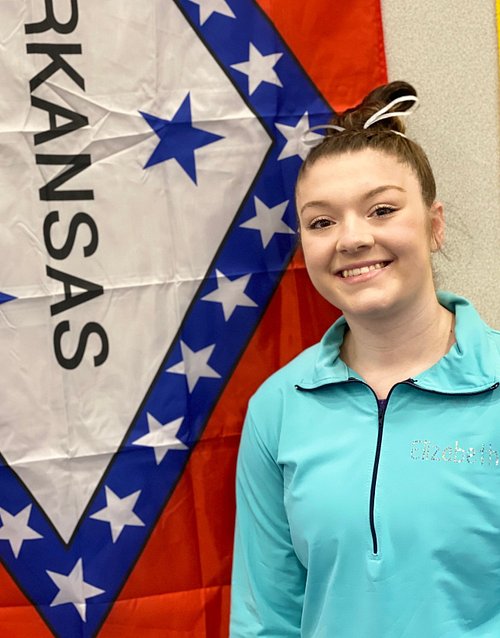 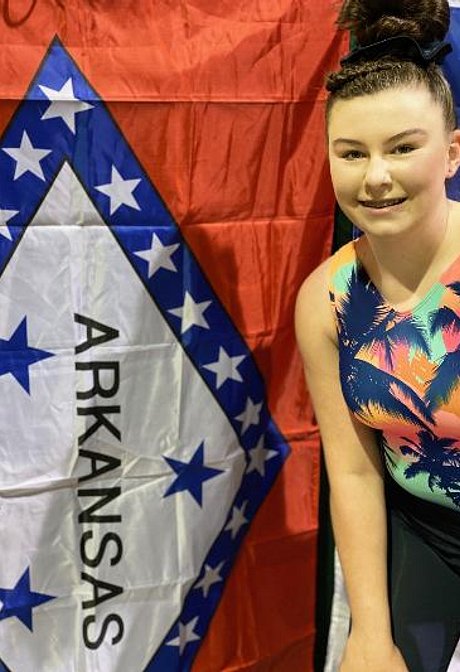 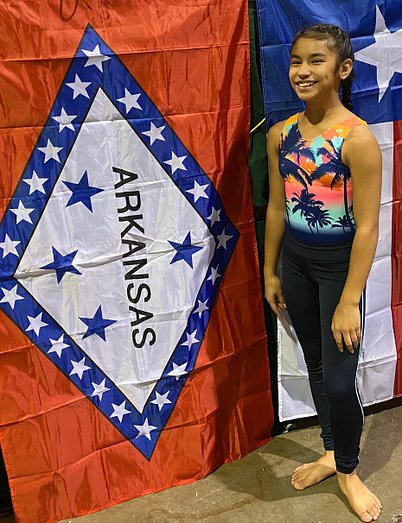 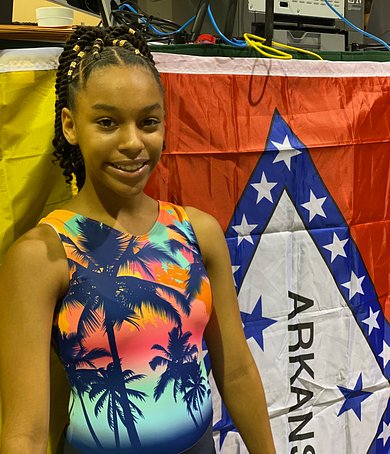 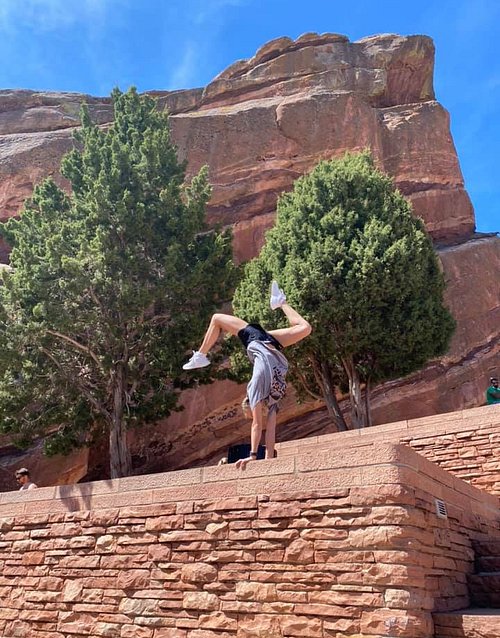 Grayson Thomas placed First on Floor and Ninth on Vault.  This means that Grayson is an Xcel  Regional Floor Champion.  Congratulations, Grayson.

Lily Fields, right, had her personal best at this meet.

Elizabeth Scott competed Xcel as a Diamond Xcel Gymnast.  Diamond is the highest level for Xcel.  Elizabeth has been in gymnastics at Jax Gym for eight years.  She has also been assistant coach for Level One gymnasts for two years.  This is Elizabeth's Senior year and she will be leaving to attend college at U of A, Fayetteville, to major in physical therapy.  We will miss Elizabeth and her parents.  And we wish her the best of luck in her future endeavors.

Kendyl started Rec gymnastics at Jax about four-five years go - started Team as a Level Four, then moved to Six, then Seven and now eight.  Kendyl placed First on Floor with a 9.575 and Fourth All-Around.  Very proud of you Kendyl - you know what a fan I am of your floor work.

We hope to be writing next year about this time how our Jax Gymnasts competed in Level Nine Regionals.

The weekend following Level Eight Regionals were the Level Seven Regionals and Xcel Regionals for Diamond and Platinum gymnasts.  The gymnasts, coaches and supporting friends were reported to have had a great time in Aurora, Colorado.  The group was in Aurora from Thursday to Monday and thoroughly enjoyed the time and comraderie among the gymnasts and families.

Kylie has been at Jax Gym since she was about three or four years old and gave up Jax high school cheerleader to be able to compete at the higher level.  Second All-Around!!!  Way to go, Kylie - could not be more proud!

Two of the Jax Gym Level Eight Gymnasts qualified to attend the Region Three Level Eight Regional Competition which was held April 23, 24, and 25th at the Overland Park Convention Center, Overland Park, Kansas.  Region Three covers the gymnasts from seven states who qualify to attend the Regional Competition.  Those gymnasts are from Arkansas, Kansas, Missouri, New Mexico, Oklahoma, Texas and Wyoming.  Jax Gym gymnasts who qualified were Kylie Belew and Kendyl Bush.  Kylie and Kendyl were accompanied by Coach Dennis Harris.  The gymnasts are shown below with their medals presented at the meet.  Kendyl and Kylie represented Jax Gymnasts in the best manner.  They competed at the Sunday noon session against 52 gymnasts from top teams in the seven states and Kylie placed second overall and Kendyl placed fourth overall.   There were probably over 500 Level Eight gymnasts competing in this meet.

Usually, I only post placements but we're all so proud of these two gymnast that I'm posting scores, too.

Left is Kenzie Howard - Kenzie is the daughter of Coach Stacy.  Kenzie started Jax Gym at the age of four at Level two, after being there for preschool gym and rec gym.

Kenzie, Kaeani and Anna all competed Xcel Platinum in the Aurora Meet.

Kaeani Cruz came to Jax Gym with her younger sister Ariana three years ago.  I am told that their dad is retiring and they are leaving the area.  I have enjoyed knowing and watching the girls and they will be sorely missed.

Anna Highfill started her gymnastics career about four years ago.  She has been with Coach Stacy since she started.

Anna is standing in front of the New Mexico flag and I am reminded that I have lived in four of the seven states - Kansas, New Mexico, Texas and Arkansas.  (Also Ohio and Virginia, Taiwan and Philippines.)

Emerson Pulley competed Level Seven in the Colorado Regional Competition.  Coach Laurel was there with Emerson.  Emerson came to Jax Gym as a Level Four four years ago.  Emerson placed tenth on bars with a 9.3.

Coach Stacy is shown here at Red Rock with Coach Taylor Rai from Flip Flop in Pine Bluff, where she has been a coach for the past several years.  Taylor Rai or T Rai as she is sometimes called competed for Jax Gym from Level Six to Level Ten.  T Rai came with a number of gymnasts from another gym that was closing down and we became close friends with all of these families.  Jax Gym had its first Level Ten Team with T Rai, Kayla and Haley Edgins. T Rai graduated in 2012, graduated from college, got married and has a nine-and-a-half month old  precious little girl.  It is great that T Rai has carried on the gymnastic traditions that we hope she learned from her years under Coach Laurel and the other fantastic coaches over the years.  T Rai's xcel gymnast took first-place AA in her bracket.  Coach Stacy was accompanied to the meet by our Ninja Coach, Johnette Osbon, and Coach Laurel was accompanied by Coaches Sara, Jenna and daughter Madi, as well as Office Staff Shelly.  All were reported to have had a wonderful, more or less relaxing time, although Laurel, and I think T Rai worked the competition on Friday.

The new summer session for classes and team will begin in early June.   The summer schedule will be posted soon.

Aryonna Ford placed Ninth on Vault and Ninth on Bars.